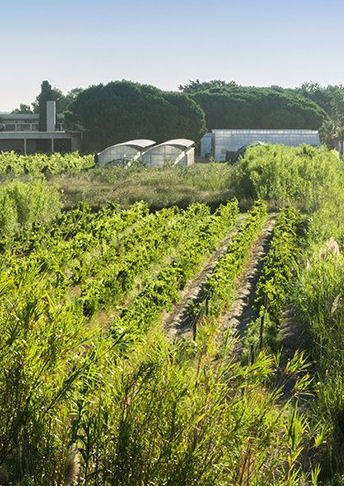 Zasso Group AG, a leading specialist in electric weeding solutions, participated in weed control efficiency and environmental risk pre-testing in vineyards at Vinopôle, an experimental research unit of IFV in Lisle-sur-Tarn, France during the entire 2020 season.

The first generation of XPS, from AGXTEND’s family of XPower electric weeding solutions, was used, and in this case, without power boost. The objectives of the performed tests were to confirm positive efficacy results, to draw up an initial weeding application recommendation with XPS and to verify the non-impact on soil life, grape yield and quality.

3 Integrity of vine respected: no damage to the vine, no burns, no debudding of grapes

4 No negative effect of electric weeding seen on earthworm population

The year 2020 is a pivotal year for all winegrowers given the looming and predictable ban on certain herbicidal active molecules. Today, alternative non-chemical solutions exist but they are not effective enough or do not respond to producers’ problems. Historically, consumers have been very interested in the methods used by winegrowers. It is therefore important from an economic and societal point of view that producers adapt to the new consumer demands for more environmentally friendly winegrowing practices.

The French vineyard is very heterogeneous in terms of row spacing, type of soil, relief, specifications etc. It was with this idea that the XPS was developed, at first for wide and very wide vines, without steep slopes, with maximum flexibility and ease-of-use.

The trial was carried out by IFV on a “cavaillon” with a history of intensive chemical weed control which means a low weed ground coverage and non-excessive weed emergence in spring. This situation can be confirmed as ideal status to change weed management in vine from chemical to electrical usage without an increase of inefficacies.

In a second trial carried out by IFV, an area with a high degree of ground coverage with mainly grasses was treated. This area represented more or less the status of current organic cultivations, which have to rely entirely on mechanical alternatives, which seem to be unable to preserve weed control for a longer period and results in high weed coverage in spring. In summary, these extremes of trial areas were selected and treated to proof effectiveness of electrical weeding in dependence on the ground coverage and on different weed species.

It was found that the initial ground coverage in spring, taken all species at the time of the first treatment together, is decisive to obtain complete and sustainable weed control effectiveness of the Electroherb application. The effectiveness on single weed species found in the vineyard in detail varied between 10 to 100% control efficacy, with an overall average of 70% weed control efficacy due to a single XPS applications with 3,5 km/h. A slight effect of working speed has been observed between 2.5 km/h and 3.5 km/h. This is logical because the higher the working speed, the shorter the contact time between the electrode and the adventitious, the less energy is applied on the leaves of the weeds.

Concluding, the results showed, that this electric weeding technique is more a technique of anticipation than a technique of catching up on neglected thoroughness in weed control managements. Importantly, the integrity of the wine stock was respected, no damages have been reported. In the rare case that a side shoot had contact with the electrodes, it was found, that it dies without damaging the vine as a whole during the vegetation period. Moreover, no burns or debudding during the grape development were observed.

At the end of the growing season earthworm counts were taken on 23 October 2020, after the last Electroherb application out of three applications in total. The sampling involved a mechanical, as well as a chemical variant. The results express the effect of the different application on the earthworm population level without particle occurring acute impacts.

The count was carried out on electric weeding methods at the lowest speed, i.e., with the application of the maximum amount of electric energy with the following results:

Despite common variability in the number of individuals per area, from the average number of individuals presented, in terms of earthworm abundances, in can be concluded that the effect of three electric weeding applications on the earthworm population in vine at the end of the growing season can be considered reassuring. No effect of the Electroherb application on earthworms in 2020 were found by IFV. The studies will be continued in the coming years to exclude long-term effects on the earthworm population.

The efficiency of electric weeding is very satisfactory: > 80% of weeds were effectively and sustainably controlled. The 2020 tests in vineyards showed statistically similar effectiveness to chemical weeding. Early season weeding in February and March is essential to ensure a good weed management for the whole season. Therefore, we recommend up to three Electroherb™ applications during the season in dependence of weather and precipitation situation.

The Electroherb™ technology, applied with the XPS, showed that its mode of action represents a suitable alternative to conventional, chemical weed control practices or other alternative methods.