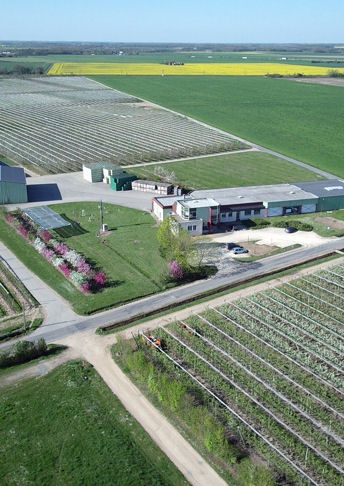 Zasso Group AG, a leading specialist in electric weeding solutions, participated in successful efficiency and ecotox pre-testing in an apple orchard weed control strategy at the La Morinière experimental farm of CTIFL in Saint-Epain, France during the entire 2020 season. The XPS from AGXTEND’s family of XPOWER™ electric weeding solutions was used.

The aim of these tests was to assess initial efficiency and ecotox performance in this segment using the XPS solution, and to evaluate the necessary mechanical adaptations of the XPS machine, currently commercialized only for wide vineyards.

Today orchards are in a transitional phase regarding weed control. For example, apple trees are being planted with rootstocks. These usually form superficial roots, but this phenomenon is increased with chemical herbicides and with the irrigation that is sometimes installed. The roots do not make the effort to go deep because they do not compete on the surface of the soil and do not need to go deep for their water supply.

The authorities are considering certain herbicide bans, but non-chemical alternatives today are technically difficult to implement.

Mowing is often used but it leads to the implement of perennials that compete with the apple tree for water and nutrients. Irrigation rates could then be increased. Other alternatives (e.g. thermal) are currently marginal because they are not efficient enough, too slow or too dangerous.

In 2020, two weeding methods were compared by the CTIFL research team: a chemical reference as used in many conventional orchards and the Electroherb™ using the XPS machine.

Tests carried out on a microjet irrigated plot show efficiency curves and therefore soil cover that are broadly the same with a chemical herbicide and with Electroherb™.

At the end of the season, in September, the Electroherb™ condition had lower grass cover than the chemical herbicide condition but statistically they were classified in the same group, in other words broadly the same efficiency.

Based on these tests with CTIFL, Zasso’s development has identified a need to design applicators that can accommodate for mounds of soil between fruit trees, through length and height adjustments. Such orchards-compatible applicators will be made available from Q2 2021.

In summary, very promising pre-tests in the orchards. Confirmatory tests will be carried out in 2021 with more modalities, more scenarios, and more analyses, using a new XPS applicator adapted for orchards. The ecotox part will again be analysed with not only macrofauna but also microfauna, bacteria, and fungi.

The conclusion from the CTIFL report is that the Electroherb™ technology, applied by the XPS,
showed that its mode of action represents a suitable alternative to conventional, chemical weed control practices or to other alternative practices.