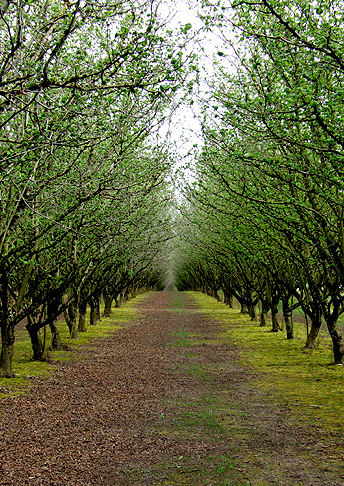 Zasso Group’s equipment is being used by a researcher in Oregon to control weeds in blueberry and hazelnut areas and may also become an option for growers of these crops in Brazil.

A researcher from the American University of Oregon, in partnership with hazelnut and blueberry producers, is testing the Brazilian technology of electric weeding from Zasso Group. This less environmentally invasive way of controlling weeds has been gaining strength in Europe and is now starting to be disseminated in the US as well.

Besides being modern and safe, our technology is environmentally friendly. Following a global trend in agribusiness, more and more effective methods with less environmental impact should be implemented in farms around the world.

With the support of a grant from the United States Department of Agriculture (USDA), Marcelo Moretti, a researcher and assistant professor of horticulture at OSU began experiments last month as part of a three-year project to evaluate the effectiveness of electric weed control in Oregon.

I suspect growers will adopt this as an additional tool for weed control, especially for those resistant to herbicides.

For him, the solution can be adopted by both organic and conventional growers.

The researcher believes that it is important to find more non-chemical tools to control herbicide-resistant weeds. This happens when a field of weeds is sprayed year after year with a single herbicide. Weaker plants die, but some naturally stronger ones survive, reproduce, and pass on their resistant traits to the next generations.
Testing has begun in two hazelnut orchards, where herbicide-resistant Italian ryegrass is a severe problem. Moretti will also work with a blueberry grower to test the effectiveness of electric control on perennial weeds, such as creeper, a member of the ipomea family.

The professor believes that technology will be widely applicable in fruit and nut trees, hops, vineyards, and other crops. Varied sizes of units equipped with technology can be used, such as the Electroherb model, which maneuvers easily on hills and in narrow rows.

Compared to other forms of weed control, the initial investment and labor inputs for electric control are expected to be higher per hectare than the average chemical costs than most non-
chemical methods. However, this should be considered an investment because as Moretti said, in areas where herbicide resistance exists, he expects Zasso Group’s technology to cost less
eventually compared to multiple chemical applications. Coutinho points out that this is a smart investment.

At first glance it seems like an additional expense, but with the tool’s effectiveness, the ecologically correct results being very positive, and in the long term the effective decrease in the massive use of herbicides, for sure the technology pays itself off and is viable for crops.

The American farmers who will participate in the research by adopting the technology will need to follow safety protocols, just like all the company’s customers in Brazil and Europe.

The person operating the machine is not at risk of electric shock, but caution is needed when applying it.

During the trials, Moretti’s team will test the effectiveness of the method on diverse types,
densities, and ages of weeds, various soil types, in various climates, and with different stresses.

The United States and Canada are the world’s largest producers and consumers of blueberries.
In the Southern hemisphere, Chile and Peru are the main producers of this fruit and Brazil is also cultivated in cities with a low climate.
The fruit has a bittersweet flavor and functional characteristics. With consumption becoming
popular in the world and in the national territory for its high content of natural antioxidants,
especially for its use in confectionery. With the accession of new blueberry producers in the
country also grows the possibility of deployment of technology Zasso Group here in another crop.