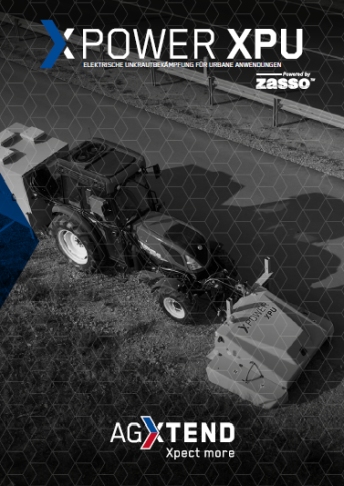 As a highly effective alternative to chemical agents, the tractor-based XPU allows the systemic control of unwanted vegetation thanks to the tested XPower™ system and electrophysical technology. Such chemical-free solutions for weed control are becoming more and more important in municipal environments, in gardening and landscaping as well as for special weed control needs such as in industrial areas and on paths.
The advantages of the XPower™ system, which has already been tested itself in agriculture, can be seen among other things:

1 it is residue-free, at any time of the year

2 largely independent of the time of day

3 largely independent of the temperature

4 as well as the systemic effect on the weed

Like the larger agricultural variant, the XPU system consists of two components that are attached to the front and rear of tractors. The unit in the rear includes a generator, up to 12 high-voltage transformers with an output of 36 kW (including Power Boost option) and an electrical control cabinet. The applicator in the front attachment can be swivelled out to the
side so that the vegetation next to the tractor track can also be combated. It consists of three rows of static electrodes.
The generator in the rear is driven by the tractor’s PTO shaft supplies high-voltage electricity, which flows into the plants and then into the ground via the applicator in the front hydraulics over the entire working width of 120 cm. The circuit is completed via a second applicator that either touches other plants or the soil. The electrical energy systemically destroys the plant structure immediately as well as the water and nutrient system of the plants right down to the roots with a single treatment, since cells and vascular bundles are irreparably destroyed. This ensures that the plants are no longer alive; this makes the electrophysical process much safer and more efficient than other weed control methods, after which the plants can sometimes put down roots again.

The use of the XPU device offers advantages over other methods. Because its mode of action is systemic, the effect is as long-lasting as with chemical processes, but they are completely replaced. The effect is only slightly dependent on the time of day or temperature, and no specific resistance of the plants is to be expected. Since there is no intervention in the soil, it remains protected from erosion and the seed supply is not stimulated by germs. There are no chemical residues whatsoever – a particular advantage, especially with municipal use – and the life of the soil remains unaffected.

The Electroherb™ technology took part in a 2-year study as part of the ‘ControlIinRoad’ project. Invasive plants were fought with alternative methods in cooperation with the Austrian research institute AIT. The focus was on the two weed types ragweed (Ambrosia artemisiifolia) and the Japanese knotweed (Fallopia spp), which are very common along roadways and endanger native biodiversity and ecosystems. In 2019, a comparison between seven control methods showed that Electroherb™ controlled the production of the dangerous pollen of the grape herb more than 90% efficiently, in contrast to only 38% with conventional mowing techniques. Similar test results have been found and confirmed for Japanese knotweed.

With XPower™ and the smaller XPU device now being presented for municipal applications and fields of application in gardening and landscaping, we now also offer sustainable solutions for combating unwanted vegetation in addition to our proven municipal technology. The system works residue-free and does not lose its effectiveness even with subsequent precipitation. Soil, water and insects are not affected by the application, and use is also possible without restriction in environmentally sensitive areas – such as along a stretch of water.